Not Ashamed of the Gospel 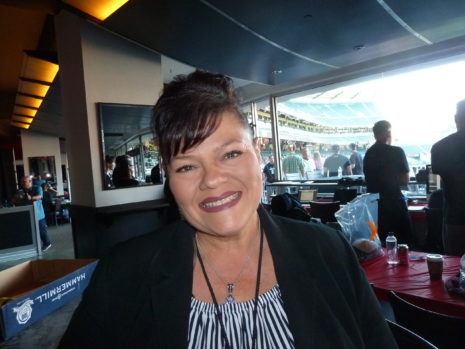 Gina met David at work for the LA County Sheriff’s Department. David was a deputy and Gina was a clerk working on high-profile felony arraignments. Neither of the two were Christians at the time they met. David proposed to Gina six months after they met and they were married 14 months later.

David grew up Methodist and Gina grew up Catholic but it wasn’t until after their first son, Ryan, was born that they both thought they should start going to church. They had no idea where to go, so they started church shopping. They went to Catholic churches and Methodist churches but they didn’t care for either.

One Sunday morning, Gina went driving around to look for a church when she drove by a group of bikers hanging out in front of an elementary school in Seal Beach. That “just happened” to be Calvary Chapel Pacific Coast (CCPC). Gina and David started attending CCPC in 1996. In April of that year Gina was driving to work when she heard Pastor Greg Laurie give an invitation to accept Jesus over the radio. The Holy Spirit moved and Gina prayed that day. A year later, when Gina made a public proclamation standing up after an altar call at CCPC, David too had prayed the sinner’s prayer. Gina was elated to hear what David had done.

After that, she and David began serving together as greeters. At CCPC Gina also served in the nursery, hospitality for the worship team, and she cooked and sold chorizo and egg burritos to benefit missions. She has a servant’s heart, that’s for sure! Gina a
nd David started attending Harvest Orange County, where they served as a team.

Unfortunately, in 2015, a cancer that David had fought and overcome 27 years earlier had come back in his liver and other vital organs. And six months later David left this earth for heaven. Gina cherishes the last six months the Lord gave her with her husband and knows, without a shadow of a doubt, that she’ll see him again and they’ll get to spend eternity together.

Philippians 4:13 says, “I can do all things through Christ who gives me strength.” And John 15:5 says, “I am the vine; you are the branches. If you remain in me and I in you, you will bear much fruit; apart from me you can do nothing.”

Gina still serves the Lord, and she serves Him at the SoCal Harvest, but most importantly, she shines the light and love of Christ to all around her. She is a pillar of strength—the strength that comes from Jesus!