Billy Graham: The Man I Knew Is Now Available!

Having a Conversation with Jesus

Deep in thought, Tim prays, and asks God how he should resolve some people problems that he’s been experiencing. Once again, he finds himself in a familiar place in life. In seventh grade he had a hard time, he felt isolated, he was bullied, and was abandoned by friends. He had to learn to depend on God to get him through it. Fast forward to today, he talks about the problems he has had in maintaining friends.

He was a student at UCI for two years when he had to quit and go back to his native Korea in order to serve in the Korean army. It is what all Korean men must do for a total of two years. Although difficult, he saw it as a good thing because it allowed him to keep his dual citizenship and it also gave him a sense of pride, especially as a Christian.

But being back in the United States is not an easy adjustment for him. He lost touch with friends and making new friends isn’t always easy. Tonight, Tim is looking to God because he believes God will give him the clarity he is looking for. As he turns his gaze to the setting sun, he talks to the Creator. “If you feel like it’s too hard to pray to God, then just have a conversation with Him,” he says. “It’s a good starting point.” 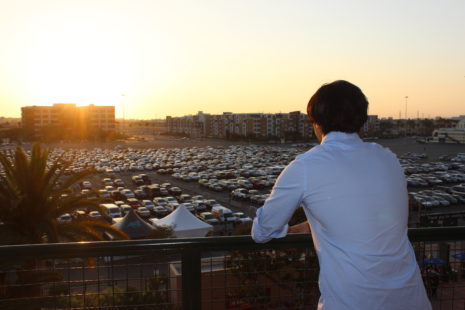 Devotion
Devotion
How God Feels about Us
Is God really paying attention? Does He know what we’re going through?
Greg Laurie